I recently participated in the art protest movement started by Tarantadong Kalbo on Facebook. The connection between art and protesting has been established many times throughout history, there are so many great examples out there from Guerilla Girls’ performances, Ai Weiwei’s art, Nan Goldin’s protests highlighting the opioid crisis, and many, many more. I think TK’s #tumindig artwork is an example of a movement that ignited and grew right before our eyes precisely because it connected with our emotions. It connected even with people who are unable or previously unwilling to articulate that feeling of indignation at being bullied or pressured into conformity or silence. I realize a few years ago that I’m living through the proliferation of another cult of personality and it has been very ugly.

Through the past years I’ve tried to connect with how I felt about what is happening in our country through art. Oftentimes I would find the imagery in my head before I found the words to describe how I felt. The experience of sharing my art on my limited platform online was a mixed bag. Some of my friends ignored it, some sympathized with me, some have unfriended me, very few have tried to talk to me about it. This is the first time in my life that a few friends have leveled cruel words at me in behalf of a political figure (of all people). As much as I’ve resolved not to do the same, sometimes it gets on my nerves too. The past few years have shown me how dangerous subscribing to a cult of personality can be. It’s unsettling how people I personally know have changed in very noticeable ways, and it’s been really heartbreaking to see this unfolding in real time.

It’s almost as if these followers have formed a human shield around the object of their affection, and the conversation has ceased being about policies, laws, etc. It has become personal. Attacking their “idol” is tantamount to attacking them, and they retaliate passionately against you. It has gone beyond healthy debate and become damaging to relationships. How can I rationalize this as just being patriotic when people I used to love and respect are alternately denying extra judicial killings of alleged drug addicts and justifying it, depending on what they read online that day? Among many other reasons. There’s no rhyme or reason to this. Yes, it’s important to recognize the good, but it’s equally important to be cognizant of the failures.

I think the genius about TK’s #tumindig art protest is that the more the DDS trolls attack it, the more they prove TK’s point. They’re not attacking a personality but a set of ideals that are not inherently wrong. The post which became a protest movement is, for me, a statement against the groupthink this DDS cult is prone to. It urges us to reject conformity for the sake of a cult of personality. Detractors insist “drawing lang yan”, but they could not be more wrong. Each #tumindig avatar has a real person behind it. The discontent and the dissent is real, but more importantly, the impact of art as a means of protest can also not be underestimated.

The different art forms have a way of connecting with people on a level that other means of protesting can’t. It has a way of chipping away at your prejudices and forcing your mind to take a different path of interpreting things. If nothing else, effective art should set your mind free from the constraints of conformity.Throughout history, when cults of personalities paved the way for totalitarian governments, art persisted. Real sentiments of real people longing for the freedom to be heard, longing for change, inevitably rise to the surface, like the need to come up for air. For now, I appreciate that art (for the most part) cannot land you in jail yet. I am cognizant of the fact that in this political climate, it’s not impossible that this path will lead to that reality.

It’s also important to note that we’re in the midst of a deadly pandemic, and people are hanging on by a thread. If there ever was a time to hold the government accountable for their actions (and inaction) and to demand transparency from them, it’s now. The lives of our families, our own lives, are on the line. Now is the time to call out the inefficiencies and the poor pandemic response. Now is the time to call out the anti-poor policies, to demand transparency on vaccine procurement and distribution, to hound our “leaders” on distribution of aid. Now is the time to question, to demand more, to expect more, and not to just meekly accept the propaganda. Now is also the time to push back on the wanton and casual red-tagging of people who are merely dissenting.

An interesting side note is that I don’t recall an equally inspiring movement from the DDS crowd. It’s funny that their response to TK’s #tumindig art is to bombard him with lewd drawings depicting penises (perhaps compensating for something IRL?), immature and lewd comments, threats, boasts about their preferred politician’s ability to violently quash dissent…again, proving TK’s point more than anything. How is it that there’s nothing inspiring and edifying coming out of the DDS corner when they are eager to show that they have artists on their side too?

All of the #tumindig avatars I made for myself and my friends, after the jump. END_OF_DOCUMENT_TOKEN_TO_BE_REPLACED

Earlier today we watched this movie called Cook Up a Storm and I wrote a review of it in my journal. It was a fun movie, and I like how the set was designed; a modern city slowly inching out the small neighborhoods. The old and the new buildings struggling for a foothold. Drawing people and buildings don’t come easy for me, but sometimes I manage to wrangle out something that I like enough. 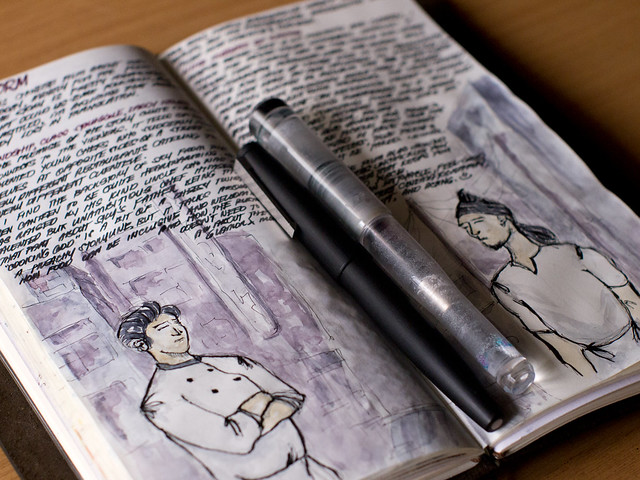 I also tried out the birthday gift my husband gave me, a digital drawing pad. I’ve never had one before, but I’ve always been curious about doing digital art. It really requires a different skill set because you’re not just drawing, you’re also puttering around a software (or two). I figured out how to do pencil drawings, but I haven’t quite figured out how to color yet. It’s so much fun doing digital drawings, once you get over having to look at the screen while you draw. 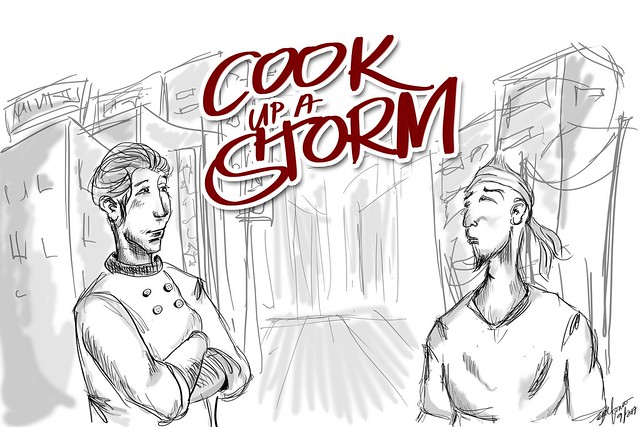 The movie was quite fun. It’s a little preachy and cheesy at times, but it’s a nice, feel-good movie with lots of great food shots. I like the values that the  movie tries to highlight. The fact that modern and traditional don’t need to be at odds with each other, and that we can all learn something from one another. That success and fame isn’t all that’s important in life, and how food can be inclusive if we want it to be. That fame can be fickle, but failure can be the path to finding new people, better people, to let in your life. It’s a nice, family-friendly movie. 🙂