Skip to content
Posted on September 28, 2017 by Pao Alfonso 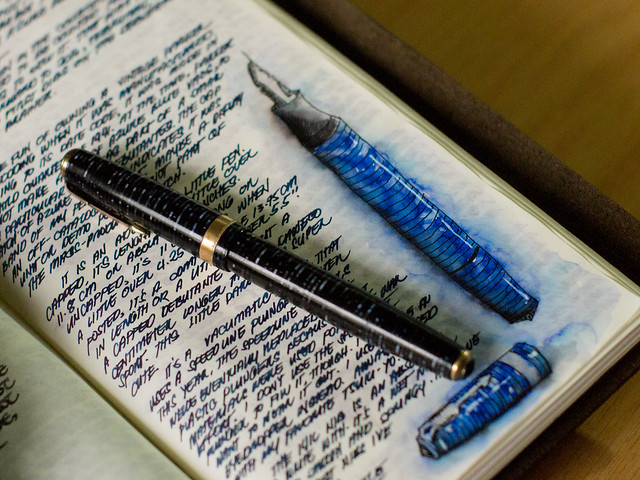 I was thinking of joining Inktober this year (and I will TRY to post as much as I can) and thought I’d try something different. Instead of using watercolors for the little illustrations in my journal entries, I’d use fountain pen ink. This was my practice entry. The pen and wash drawing is made with Rotring pen, Iroshizuku Asagao, and Parker Quink Black. I’m surprised at how vibrant the color was, especially the blue one. Kinda hard to control the flow of water and pigment, but it creates an effect different from what I’m used to with watercolors. I kinda like it.

I wrote about my favorite pen, which is a bit of a difficult question because I really love all my pens. If I really, really had to pick one, though, I think it would be this one–my Parker Vacumatic Debutante in Azure Blue. There are a lot of reasons why I love it. I like that it’s from 1941 and it still works perfectly, and that it’s one of the first azure blue vacs made.

I love that it’s really adorable. It’s a vintage pocket pen that’s only slightly bigger than a Kaweco Sport. It’s light and long enough to be comfortable in the hand. I don’t use the plunger, though, so that I can preserve the mechanism. I use it as an eyedropper, and it holds a lot of ink. It also writes like a dream. The nib is so smooth and springy, and lays down a wet line. But most importantly…it’s adorable! It’s been in my daily carry since I got it back in early 2016. 🙂