Gosh darn that’s a long name. Anyway, I’ve been using the Parker Premier Monochrome Black (which I shall call Premier from this point on) since I got it last Tuesday. Since then I managed to use up a converter and a half of ink (yes, I wrote that much in a short period of time). This is, without a doubt, up there in my favorite pens list. I know I love all my pens a lot, but I do have a short list of favorites. Those pens that hardly make it out of rotation. I can tell this one will hold a top spot for a while. I’m getting ahead of myself. 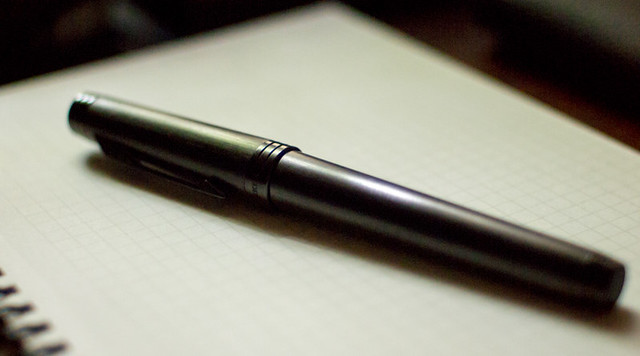 I got this pen last Tuesday and I can hardly put it down. It’s just a pleasure to write with and to look at. Anybody who knows me well enough will say that I’m not a big fan of modern pens. Least of all modern Parkers. I think they’re devoid of imagination. A shadow of the glory days of a giant brand. When I first came across the Premier online (through Fountain Pen Network Philippines), I was intrigued. It looked nothing like the modern Parker pens that I’m used to seeing at National Bookstore. This one was sleek and eye-catching, in the same way that of all the Lamy pens in all the happy colors, I’m quite drawn to the Lamy 2000 and its decidedly modern design. 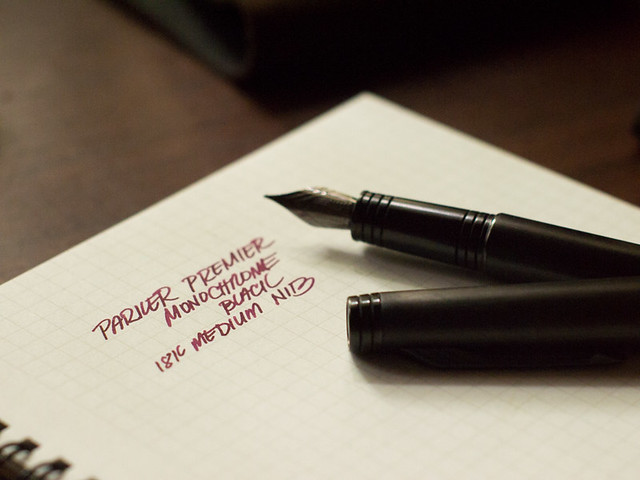 The pen is metal coated with PVD (Physical Vapor Deposition) which makes the surface very resistant to corrosion and abrasion. The barrel and the cap has a brushed metal finish, the texture is very pleasant. It does have an overall effect that looks like matte, but it’s more of a soft brushed metal finish that makes it pleasant to hold. It’s not slippery or uncomfortable in the hand, as some metal pens can sometimes be. My pet peeve is metal sections in pens, it makes it nearly impossible to write comfortably because the pen keeps on slipping. The Premier’s PVD coating ensures none of that annoying slippery feel. 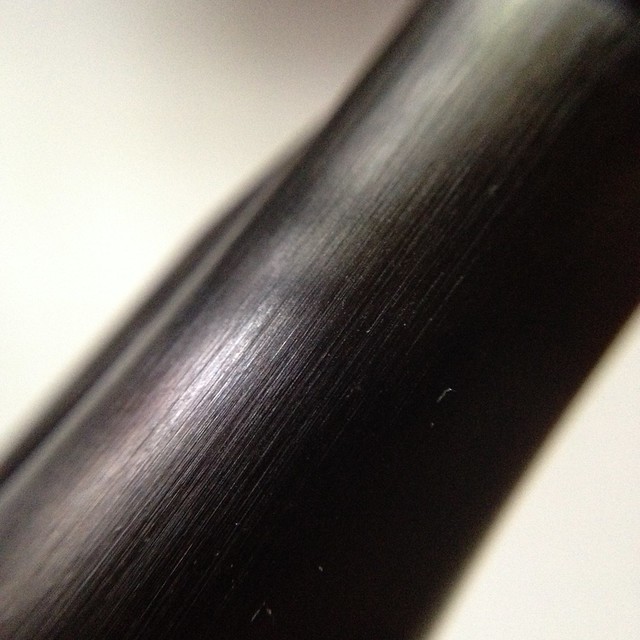 Everything about this pen speaks of a well thought-out modern design. I think this design can be a great template for Parker’s modern pens. The lines are clean and the details are pretty good. The clip looks very different from traditional Parker arrow clips. 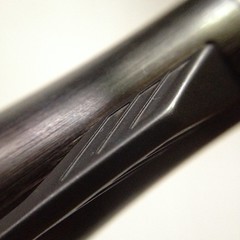 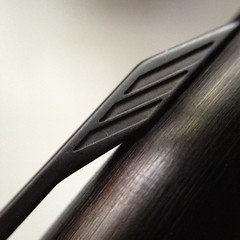 It’s angular, boxy, but gives the pen a very good modern look to it. Of course I’m still partial to vintage Parkers and their art deco clip, but this one has its own style and identity. It certainly beats modern arrow clips with thinly etched quivers. 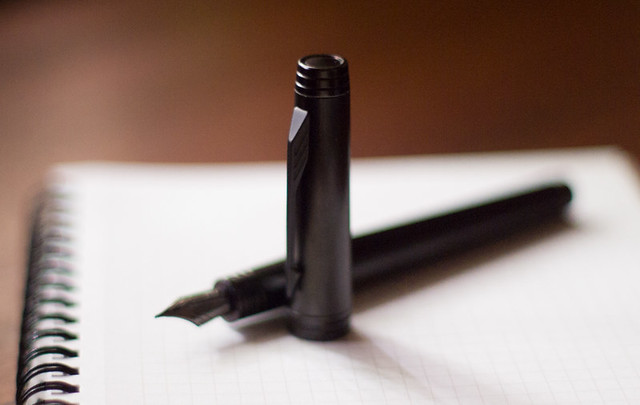 The overall effect is pretty nice, and the clip itself is functional– springy but firm. It feels sturdy enough. The cap snaps on, but it doesn’t make that hard snapping sound. It snaps to the section securely but is easy to put on and take off. It has an almost magnetic feel to it, like it glides and clicks easily in place. 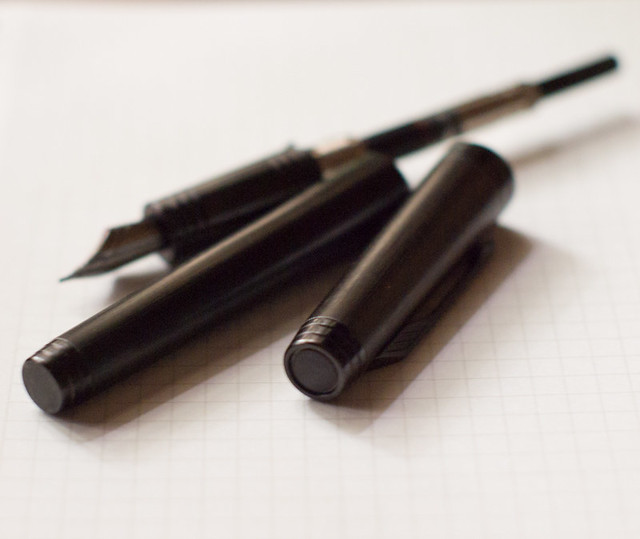 Both ends of the pen are flat, which lends more to that minimalist, modern feel. There’s nothing flashy about this pen. Nothing shiny and ostentatious. Even the finial is a simple black disc. 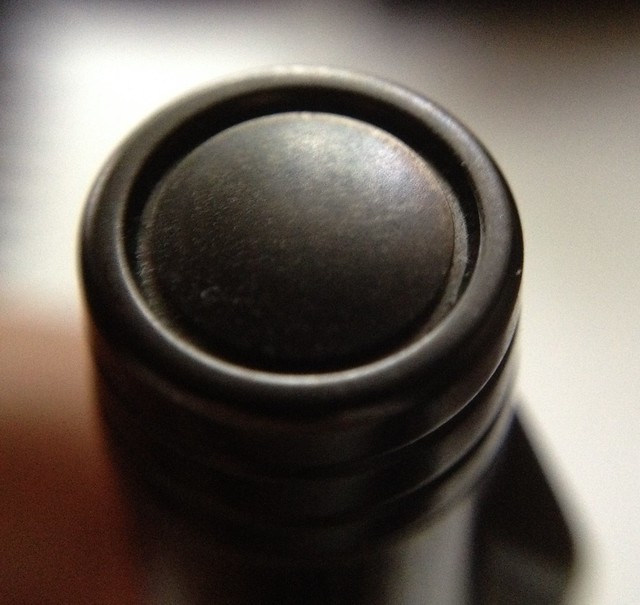 The design is tied up by three rings on the top of the cap, cap band, and end of the barrel. I really like that the PARKER logo around the cap band was designed differently from other Parkers, vintage or modern. 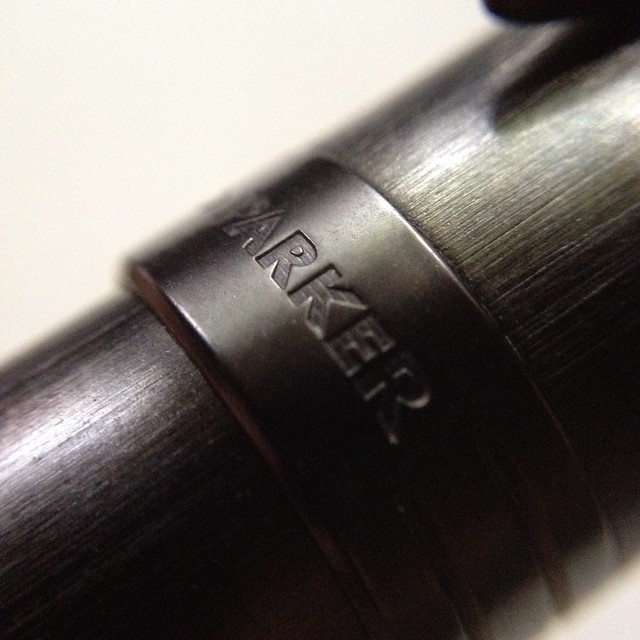 I like the horizontal lines that run through the letters. It’s a nice little detail. 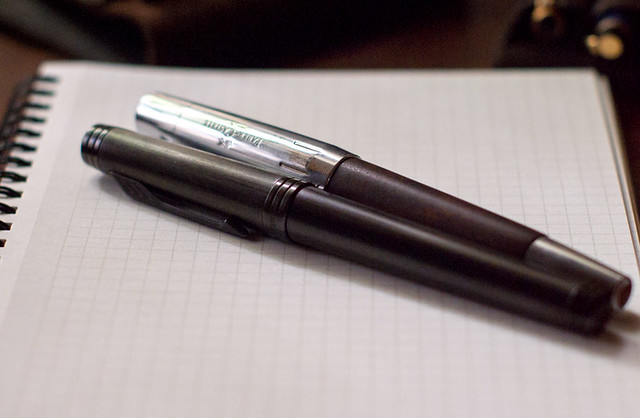 The Premier flares out a bit around the middle, so it’s not completely straight. It’s just a tiny bit longer than a Faber Castell Emotion. Below is a photo of it beside my smallest vac, a debutante. The Premier is a medium-sized pen that would be comfortable to hold even for smallish hands. 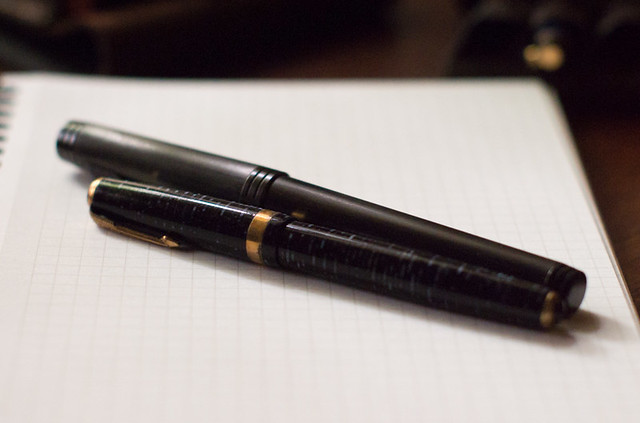 What I found interesting about it is the fact that even if it’s a metallic pen, the weight is not uncomfortable. The weight of the pen is 46g when capped, 32g without it. Being really sensitive to heavy pens, I initially thought that I wouldn’t be able to use this for long writing, but I was wrong. The pen is so well-balanced that it doesn’t feel heavy at all. It didn’t feel as heavy as it should while writing. I only feel that it’s a bit top-heavy when I post the cap, so it’s a good thing that I prefer to use the pen unposted. Most of the weight is distributed towards the section of the pen, which is probably why it doesn’t feel heavy at all. The pen uses its weight to its advantage, that’s pretty good.

The nib of this pen is 18k gold, coated in ruthenium, which is a metal element used mostly in hardening palladium and platinum. From what I understand, it’s one of the rarest metals on earth. I’ve never heard it used in coating nibs before and was curious how it would feel. 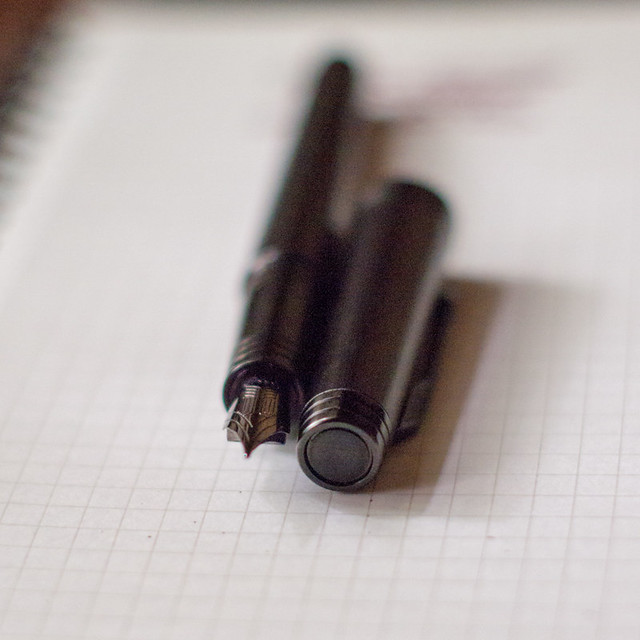 It is a bit hard to photograph this nib because it always looks like chrome, silver, or rhodium. In person, it looks more like glassy black. Like mercury, but a darker hue. The video of the writing sample will show more of that. 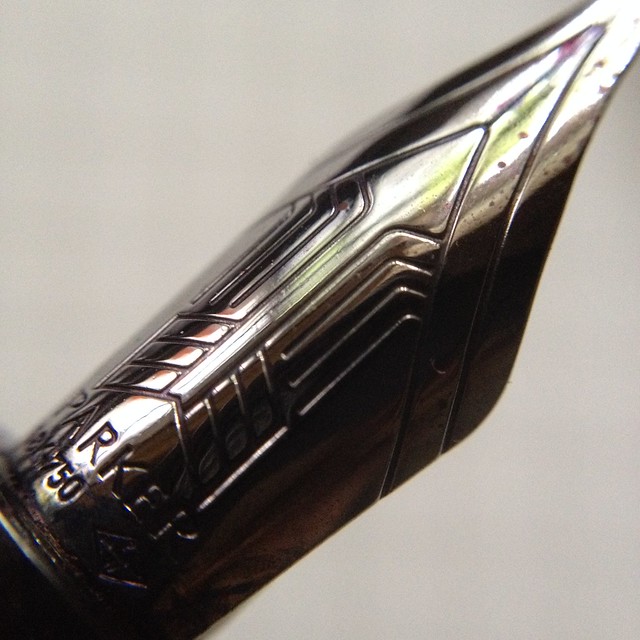 The nib has no breather hole and has a short tines. The slit doesn’t go down past the arrow design of the nib. This means that the nib will not have too much flex. I was worried that it would be hard as a nail, but I was wrong. The nib was excellent. it’s probably the smoothest Parker nib that I have, a close second is the Vacumatic Debutante, which has a pretty excellent nib itself.

Below is a close up of the underside of the feed. 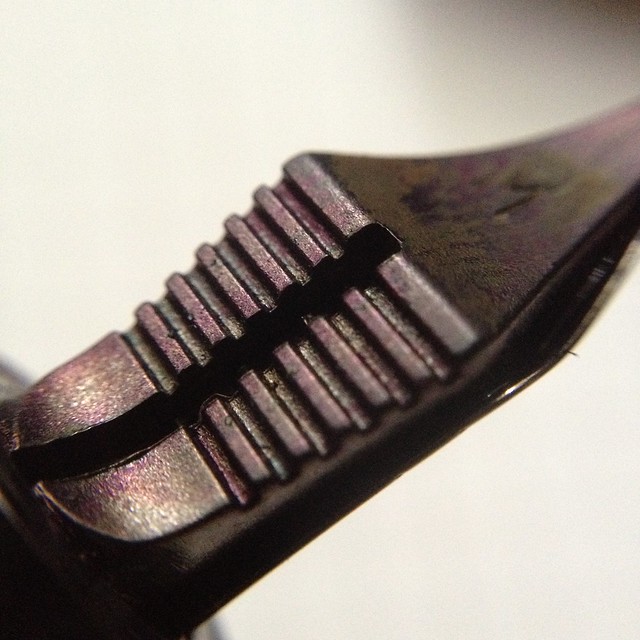 I am really impressed with the way this pen writes. After writing page after page, the ink it lays down is consistently wet. The nib needed no adjustments at all. It’s such a great pleasure to use, almost like writing on glass. The nib is pleasantly springy and it just glides on paper.

Overall, this is the modern Parker pen that I’m happy to add to my quiver. It looks very simple, streamlined and minimalist, and the nib is a dream to use. Excellent pen! It makes this doodler very, very happy.