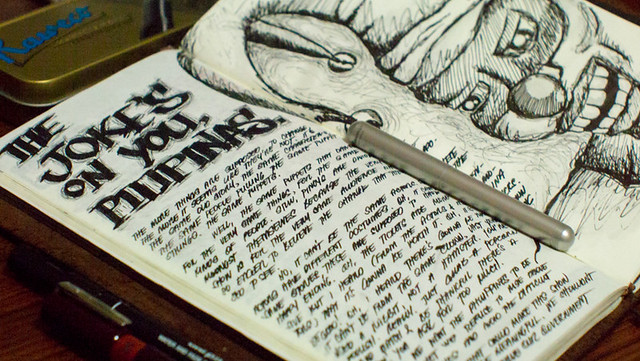 I really thought that all the hate and poo-slinging will slow down and grind to a halt after the elections. I was wrong. It looks like it will be noisy for a while. Actually, I’m coming to terms with the possibility that this is  the new normal. To care about the sanctity of human life, to care about due process and how the loss of it is a reckless way to go about a “crusade” that has good intentions, to have a balanced view instead of an idol-worshiping attitude for the new president… all that has become very unpopular. All of a sudden, we’re surrounded with people who “want change” and are less bothered by loss of human lives. Like sharks driven crazy by the smell of blood. All of a sudden we’re surrounded  by family and friends who feel strongly about rallying around the ideal. I sometimes wonder if these people shout louder and are more offensive and boisterous about their newfound “cause” because deep in their bones they know something’s wrong about all this.

I’m not one for debates, and I think it’s foolish and self-destructive to alienate my family and friends for the sake of pushing your brand of politics (of all things) in such an aggressive and offensive way. I’ve resorted to not looking through my Facebook feed (which, with my decidedly introverted personality, was once a favorite way of keeping tabs on family and friends) because of all the ugliness in it. It’s not just the news that is ugly, it’s the attitude of people. Somehow, things have grown much worse. Filipinos have become even more divided. Many of us have lost our civility and it’s like we don’t know how to balance our views and emotions anymore. There’s a reason the terms “Dutertard” and “Yellowtard” and all the other -tards were coined (makes me cringe to even read it now), and the evidence for that is all over social media.

In the narrow-mindedness that is prevailing these days, there’s no room for reason. If addicts and pushers are brutally killed, then they got justice. If one is given due process, it means justice was not done. If you’re anti-Marcos, then you’re automatically pro-LP. If you’re not red, you’re yellow. If you’re critical of Duterte, then you’re anti-Duterte and you and your family need to die violent, inhuman deaths. If you’re against the all-out-war on drugs, then you’re in cahoots with these druggies. If you clamor for due process for these druggies, then you’re condoning the violence they have done or will do in the future. If you want some checks and balances to be placed to keep the government from exploiting their power, then you’re against the drug war. If this…then that. The one with the loudest mouth, the one who can scoop up the biggest mound of shit and sling it around without care or second thought is the winner. Winner of what, exactly? No one knows.

At the end of the day, people have pulled so violently on the already tense connections that we have with each other, and boy, it’s exhausting. Humanity is exhausting. I’m all peopled-out, honestly.