My two Cross Century II pens wrote okay but the nibs were boring. Booooooring. Hard as nails and not the most pleasant pens to write with. They’re okay but they can be better. I decided that I would ask a local nibmeister, JP, to fix it up for me in my favorite kind of grind–left oblique cursive italic.

Here’s a video of the writing sample: 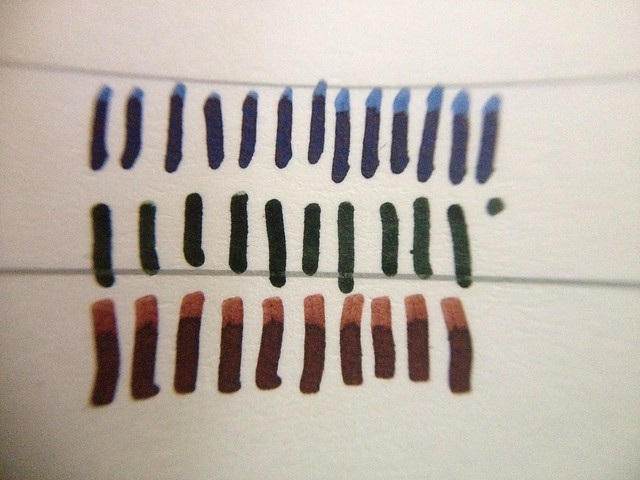 As can be seen in the photo above, the left oblique cursive italic nib has a slanted profile, the medium nib has a rounded profile hence rounded tips on the lines, and the regular cursive italic has crisp edges. 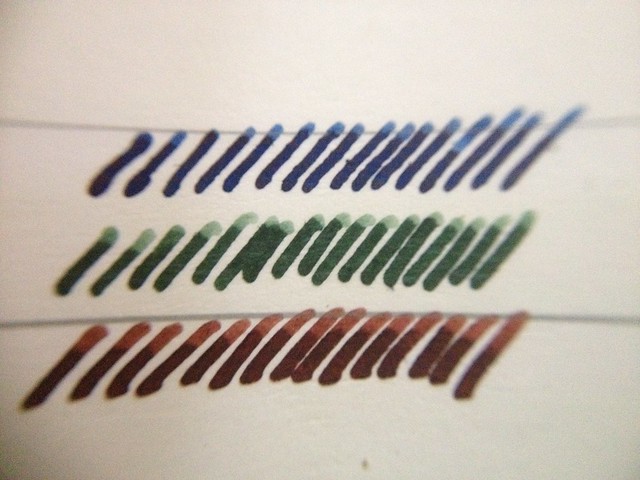 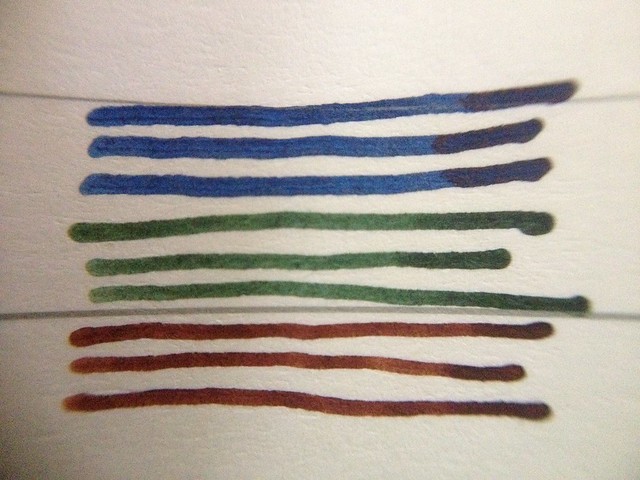 The resulting line variation makes the writing more interesting-looking, for me. 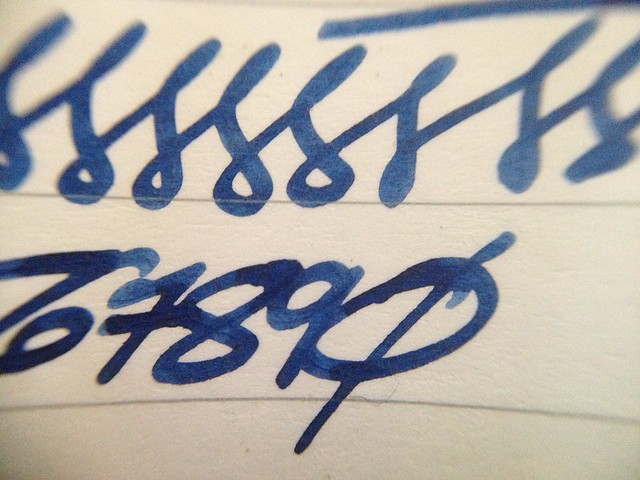 It has more line variation as you write. 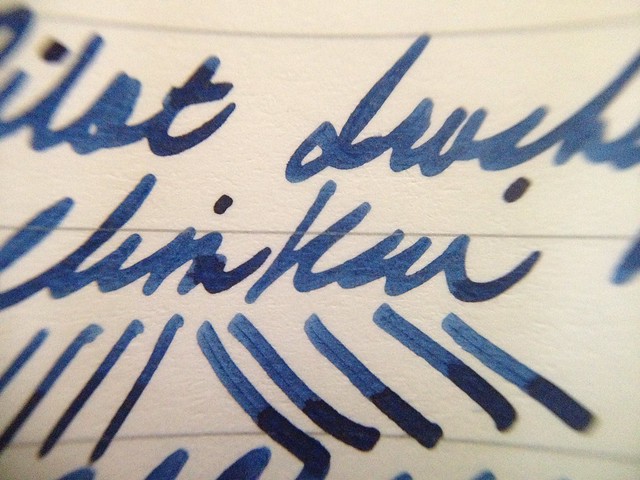 Whether you write in cursive or block letters, it makes the lines more varied and (in my opinion), a lot more interesting to look at. 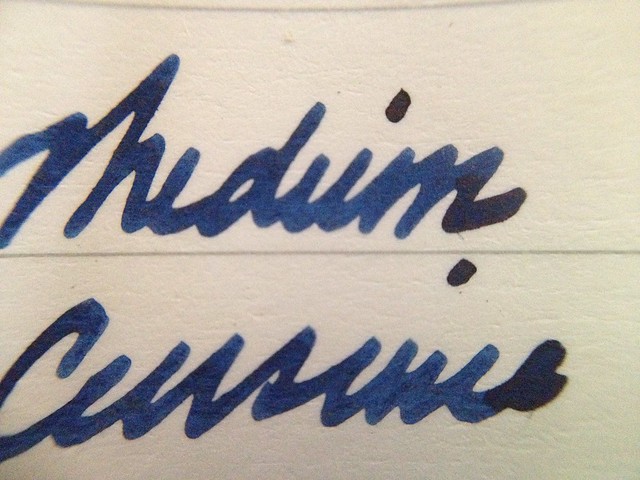 I initially asked for a regrind to a cursive italic because I thought that I should have at least one pen with a CI nib, just to try it out. I liked how it turned out so I had more done. If you rotate your grip a lot (like I do), you may find the crisp edges of a cursive italic nib to be a little difficult to use. That’s exactly what led me to a left oblique cursive italic. I like the slanted line a lot, and it’s more forgiving of my rotating grip. I think JP did a good job on these nibs. The beauty of getting a custom grind done is that you can have it customized to how you want to hold your pen, how crisp you want the lines to be, etcetera. I’m glad I added more CIs in my collection.

If you’re looking into getting some nibwork done, you can try contacting JP through his FB account. You may also join Fountain Pen Network Philippines.

I already reviewed the TWSBI Micarta 803 with a medium nib back in October, but I had recently had the nib reground to a cursive italic. I thought I would review it again because, honestly, it feels like getting a new pen. I’ll skip all the comments about the appearance and such because I already tackled that in my previous review.

Suffice it to say that I really like this pen. The way it looks, its weight, its durable material, its girth…I love everything about it. I contacted TWSBI about noticing that the ink dries up faster than what I’m used to and they sent me a new nib and feed assembly. It has since solved that little issue, I’m happy to say. So I thought that if I’m gonna venture to try a specialty nib on my pens, I’d rather try it out with a TWSBI Micarta first. I sent it out to Pentangeli Pen Spa and Nib Works and braced myself to be parted with one of my favorite pens for several weeks. However, the pen was ready in only a week’s time, and when I got it back, I had a little tutorial with JP on how to hold the pen.

I have to admit that it was a bit hard for me. The first letter of each line was always a challenge, but once I get the sweet spot, I am able to write flawlessly. Unlike round-ended nibs that can be more tolerant of pen rotation, italic nibs are a bit less forgiving. If you don’t hold it at the right angle, it feels scratchy and would sometimes not even write. Hold it at the proper angle, though and it gives your writing some beautiful line variations.  END_OF_DOCUMENT_TOKEN_TO_BE_REPLACED

I’ve only started using fountain pens this year, and at first I struggled with how the lines are not as fine as ballpoint pens. My first FP purchase was a Lamy Safari (charcoal black, fine nib) and of course the nib felt too wide for me, and it feathered and bled through like crazy on the journal I was using back then.

I learned gradually that I should use fountain-pen friendly paper. Good paper + good nibs + gorgeous ink = happiness. I discovered that I preferred medium nibs because it shows the shading of ink easier than fine nibs. It allowed me to appreciate the beauty of inks generously laid down on paper.

Then I came across people talking about other kinds of nibs, like cursive italics, left oblique, music nibs, etcetera. I got curious about cursive italic nibs since I tried a 1.1 italic Lamy  nib. So when I got my TWSBI Micarta, I decided that I’ll convert that pretty basic medium nib to a cursive italic through Pentangeli. JP was kind enough to accommodate me and finished the regrind in a week. He loaded the ink with Pelikan brown, which of course I promptly used up because when I tried that nib that he did for me, I was hooked.

It offers a more dramatic line variation than the 1.1 italic Lamy nib that I tried, and though I don’t write in cursive too much, it fits my current penmanship well.

To be honest, before I started using fountain pens again, my handwriting had deteriorated to an almost indiscernible scrawl. I’ve only just begun to rediscover the pleasure of taking the time to thoughtfully form the letters that you’re writing. I’m happy to say that my handwriting is gradually going back to how it used to be back when I was in college, which is readable even if it is quite boring.  END_OF_DOCUMENT_TOKEN_TO_BE_REPLACED