Ah, these little pocket pens. Sure, you end up inking them more frequently than full-sized pens but what the heck. They’re cute. I got this from Stationer Extraordinaire as a birthday gift to myself last September. I also ordered a bottle of Akkerman Hopjesbruin a few weeks after, without realizing that they’re the perfect pair in terms of color.

The package arrived earlier this week, it was carefully packed and included a really nice note. I always appreciate efforts like this, it adds a very personal touch to the service. 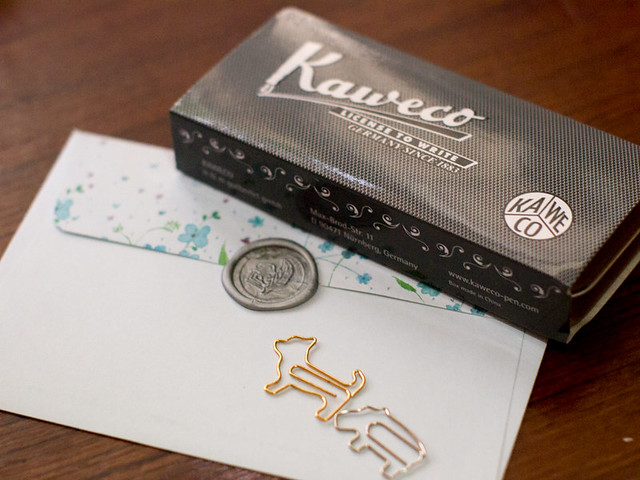 The pen comes in a tin box, with a blue cartridge and 5 brown cartridges. It also included the clip. 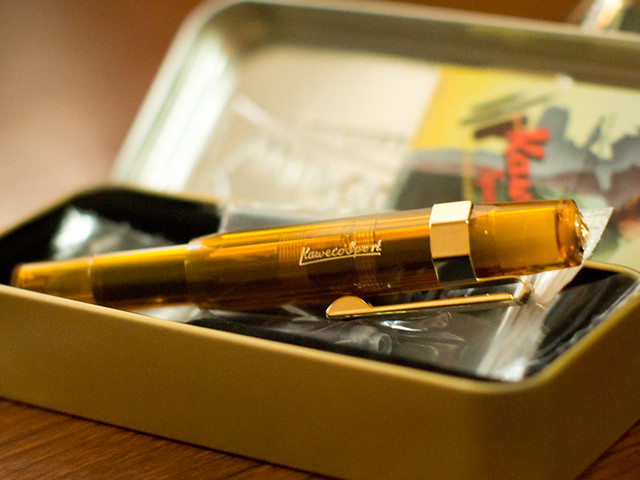 Since I also got the Akkerman ink on the same day, I decided to use that to try out the pen. Isn’t the pairing perfect? I think it is. 🙂 The ink flows really well with this pen, and it worked right out of the box. No baby bottom to smooth out this time, which is a relief. 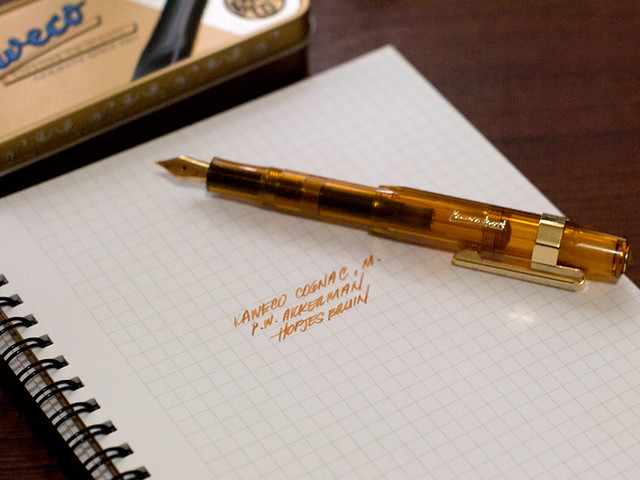 I loved the ink so much that I turned this pen into an eyedropper afterwards. I’m gonna have it in rotation for a while. 🙂 These pocket pens are just so cute. I’m gonna need another mini leather slip soon. 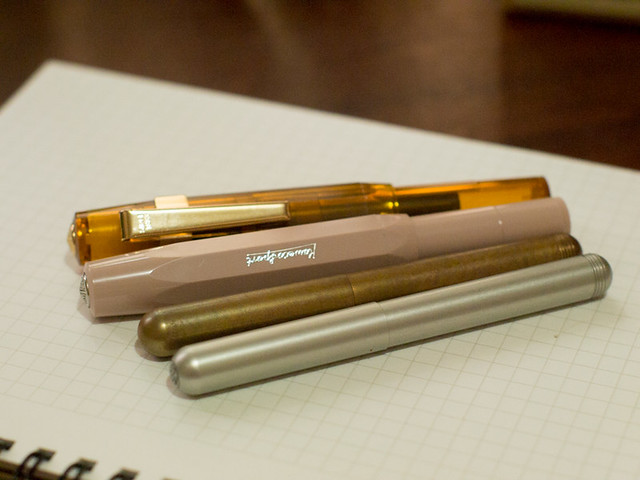 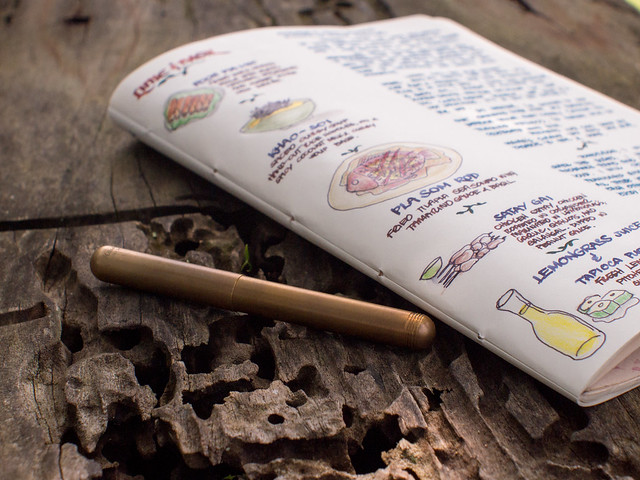 I guess that in pen collecting, as with collecting other things, your focus shift from time to time as you discover new things. I used to not be impressed with pocket pens at all, which is why I practically gave away most of the pocket pens that I tried. Then I tried the Kaweco Liliput Brass, and I thought that it was awfully cute. 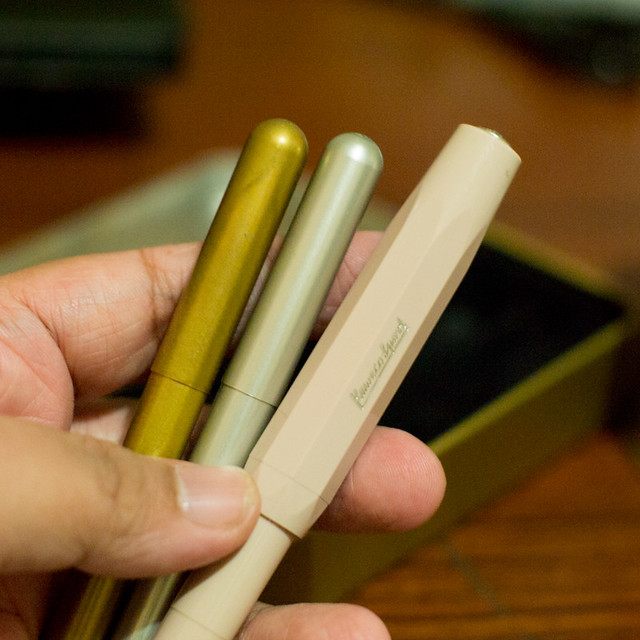 I added a couple more pocket pens afterwards, and I have a few more coming this month and next. These little pens are just so adorable. 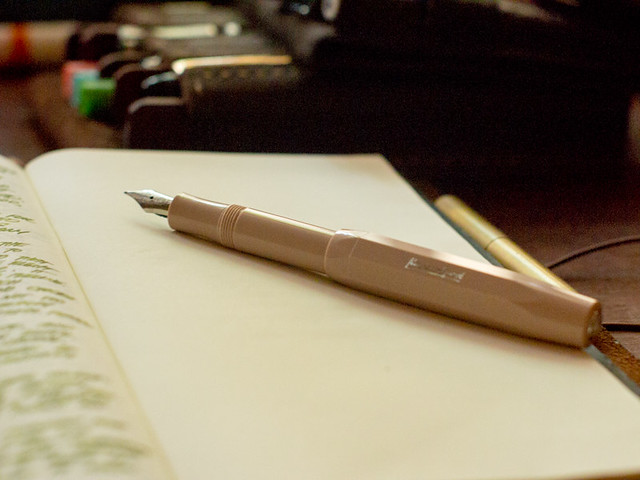 My recent purchase is this Kaweco Sport Cappuccino. I think it’s a really nice-looking pen. It has a bit of a baby’s bottom, which I noticed is quite common in the Kaweco pens that I tried. It’s easily addressed anyway, so I didn’t stress out about that at all. 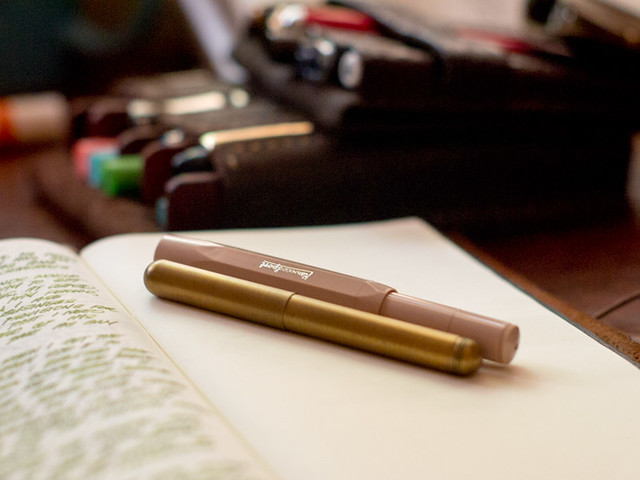 Pocket pens can be great for those times when you just have too many things in your bag that you can’t fit your regular pen case in. Full disclosure…I often bring all of my pen cases anyway (one for my regular fountain pens, one for my brush pens, and one for my pocket pens). But in cases when you simply have no room for a big pen case, these little pocket pens can be really handy. If you’re travelling, and you need something that can withstand a lot of jostling and doesn’t take up a lot of space, these can be pretty handy too. The cartridges are also small.

I am quite impressed especially with the Kaweco Liliput brass which I’ve inked with Emerald of Chivor. Sometimes (because I have so many pens inked at any given time), I kind of forget that I have this in my bag. Perhaps the longest time that I forgot about it was a little over two months. I expected the worst, fearing that the ink had dried up and I have a lot of soaking and ultrasonic cleaning to do, but it just wrote right away without hard starting. 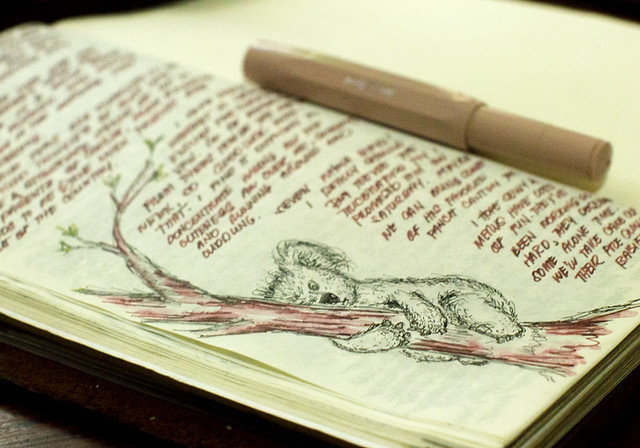 Naturally, the ink capacity is less than a regular pen, these pocket pens use smaller standard international cartridges. It’s good for a few pages’ worth of writing, though. You might need to refill more compared to full-sized pens, but you can still get a few days’ use on this, depending of course on how many pages you write. Perhaps the only downside is that you have to be more conscious about your ink level. It’s worth noting that the Kaweco Sport and Skyline can be converted to eyedroppers, which means bigger ink capacity. Another downside is that they can be easily misplaced because they’re just so small. I wish that Kaweco can come up with a clip or a roll stopper for their Liliput, but that kinda disrupts the clean design of the pen.

Don’t let the size fool you, these pens are dependable writers. ^_^

I had a wonderful weekend! I went on a short road trip with my husband and decided I’ll bring along this little beauty. It needs to be cleaned but I kinda like it the way it is now. 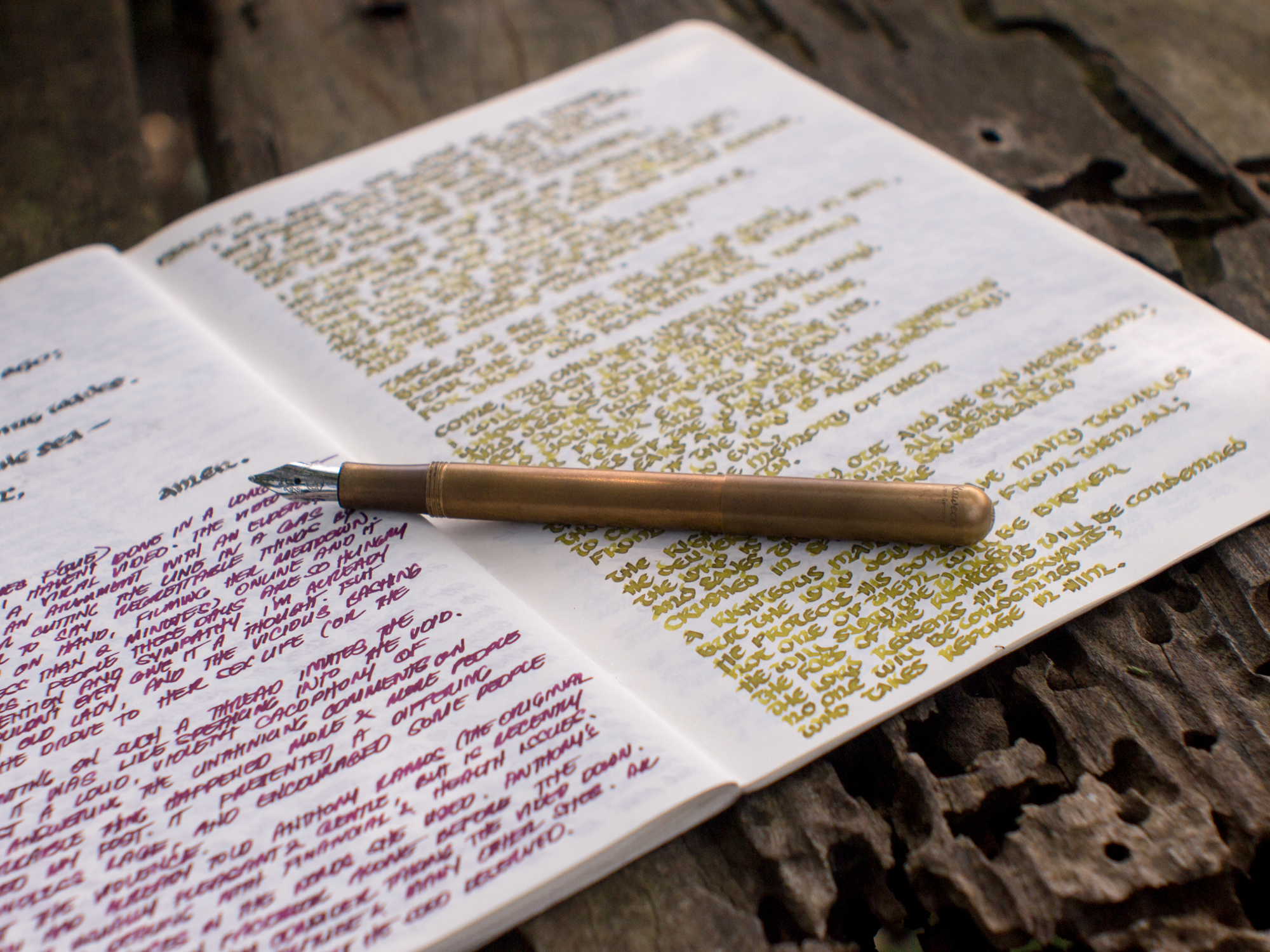 I slipped the Liliput in the leather case with my pocket knife, popped it in my backpack together with my camera, and headed out. You gotta admit, sometimes it’s refreshing to just bring a pen you know can take a beating. I don’t have to be extremely careful with it, it’s pretty tough even if it is small. It was pretty nice to not worry about scratching a pen, for a change. 🙂

Here’s another pen that has been on my wishlist for a while. I’ve been waiting for Scribe to have new stocks of this pen because I didn’t want to have to buy it online. I actually prefer the Liliput fireblue, but this one is a close second. The minute I saw it at Scribe last week, I knew that I wanted to add it to my collection. So I bought it even if the nib is broad and I generally prefer medium nibs. Look at that little cutie! It’s seriously no larger than a cigarette, and just a tiny bit longer than my pocket swiss knife.

It’s only 97mm long when capped and it’s a cylindrical shape, streamlined and minimalist in appearance. There are no clips available for this pen. It was really designed to be diminutive and simple in the way that it looks. I think that Kaweco makes the best pocket pens in the market. I love their ALSport line but I must admit that the Liliput is by far its prettiest pocket pen yet (for me, at least). Since it’s made of brass, it’s also got a comfortable heft to it, much like the AL Sport. It doesn’t feel flimsy at all, and the heft makes it easy to write with. It also will develop a nice patina over time, being hand-machined out of brass. 🙂

I often just put it in my pocket because it doesn’t seem to be vulnerable to scratches. I put it in a leather pouch and it came out with some faint-looking stains that polished off easily. It’s pretty refreshing to bring a pen that you don’t have to be extremely careful with. So far I’ve tried to shake it to see if it will burp out ink but it remained burp-free.

Being a pocket pen, it only uses cartridges, no converters. I’m not sure if kaweco’s squeeze converter will fit here, I should give that a try when I visit Scribe this week. The cap screws off the section and screws on at the end of the barrel. I like that it screws off when it posts because sometimes the cap gets pushed off while writing. It’s a very short pen and it would be uncomfortable to use while unposted. Being very small and the ends smooth and rounded, it’s sometimes a challenge to screw the cap at the end when you’re in a hurry. Also, for a small pen, the section is pretty comfortable in length, I like that a lot. I think it’s what makes the pen easy to hold and comfortable to use despite its size.

I like the little details of the pen. The KAWECO logo, the little etched typography around the cap, even the nib has a bit of scrollwork on it too. It is a pretty nice touch. I’ve always liked Kaweco’s nibs.

The only problem I had with this pen was that it wouldn’t write properly when I first got it. It’s my first time to encounter a baby’s bottom on a nib. I didn’t want to return it to Scribe because I believe fountain pen users should have a rudimentary knowledge of how to fix pens that just won’t write well out of the box.

Baby’s bottom is when the bottom of the nib is too smooth or too polished that the ink does not properly flow when the nib makes contact with paper. I followed this tutorial to fix the baby’s bottom issue. Please note though that you must proceed with caution because polishing the nib the wrong way can ruin your pen completely. You may polish off the iridium point entirely or make it flat at an odd angle. If you want to follow the tutorial in the link, do so at your own risk and take it slow.

After solving the baby’s bottom issue, I flossed it a bit with acetate to make it write wetter and flushed it with soapy water (then rinsed with water) to get rid of any residual chemicals on the feed. I admit though that it still needs some work because sometimes it hard starts a tiny bit (as you can see on the video). Either that or it needs a wetter ink. Point is, the pen didn’t write well out of the box. If I had not been determined to fix it, I would’ve needed to return the pen and since it’s the last stock at Scribe, I would’ve been disappointed to come home without a replacement. Once I did fix the baby’s bottom issue, though, it writes pretty well (occasional hard-starting notwithstanding).

Here’s a video of the writing sample. Pardon some of the skipping in the writing, I tend to lift my hand sometimes while I write so the nib isn’t really in contact with the paper. It hard-started for a bit but when I got it going, it was writing continuously and consistently.

All in all, I think the Kaweco Liliput is a pretty nice pen if you’re willing to work a bit on the nib. I would’ve appreciated it if it worked fine out of the box, and it’s weird that my friend also had the same experience with her two Kaweco Sports. My other two Kawecos didn’t have baby’s bottom but I did need to floss them to increase the flow. I accept nib adjustments as basically a part of pen ownership, so I don’t mind as much. The pen’s aesthetics is spot on, and I like that it’s heavy and easy to hold even if it is so tiny. Since it is a pocket pen, I don’t expect it to perform like full-sized pens with regards to long writing sessions. However, so far it has held up pretty well when I use it for long journal entries (four pages of closely spaced lines without any hint of the ink varying in thickness).

Despite the initial difficulties in making it write, I must admit that it’s pretty hard to dislike this pen.

Here’s something new in the pen collection, a Kaweco Liliput with a broad nib. I honestly thought it would be longer, but then when I saw it…it was soooooooo cute. So, so, so very cute. I’m excited to review this pen. ^_^ Soon!

I got a few nice pens today!

Reviews to follow. My first impression on the pens–very good. I love the blue one, especially. The demonstrator is also good, but it has a little bit of a toothy feeling to it so I might need to have the nib smoothed out soon. In any case, today is a happy day!